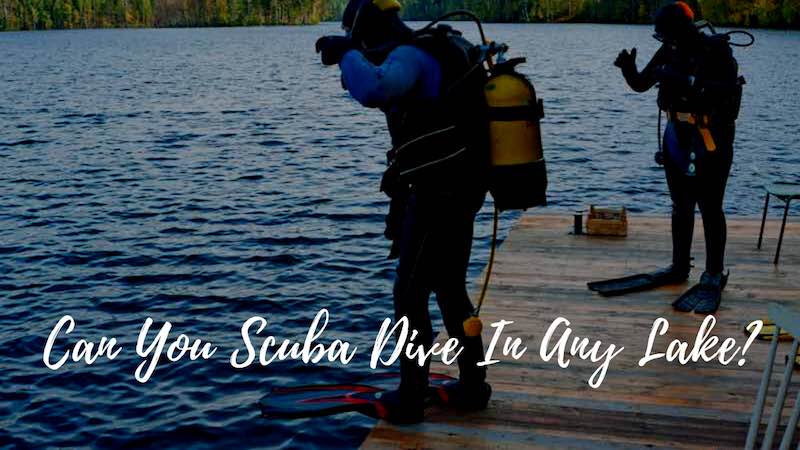 So, can you scuba dive in any lake? The answer to that question is yes; you can enjoy freshwater lake scuba diving in almost any lake.

Freshwater lake diving offers the opportunity to see a different ecosystem than what you would find in saltwater environments. Saltwater will have a more extensive variety of animals and plants, and those animals can be much larger, like sharks and whales.

Freshwater lake diving will have fewer varieties and more specific types of animals and plants. Diving in a lake will give you a look at an ecosystem that is far different from saltwater.

Diving in a freshwater lake is also more readily available to do than saltwater. For a chance to scuba dive in saltwater, you need to be near the ocean, but not so for lake scuba diving.

The United States has about 250 freshwater lakes with a surface area of 10 square miles or more. Nearly 100 of those lakes are in Alaska, with another 100 in Minnesota, Wisconsin, Michigan, New York, and Maine. Lake Superior in Michigan is the largest body of fresh water in the world!

The original question asked if you can scuba dive in any lake, and it was determined that you could. However, if you decide that you would like to try diving in a freshwater lake, there are a few things to consider.

#1. Don’t leave home without it: Bring a knife!

Even more so than diving in saltwater, you need a knife when you are freshwater lake diving. A dive knife is a tool that you will need to cut fishing lines that you or marine life has become entangled in.

Monofilament fishing lines are virtually invisible underwater. If you choose to do some wreck diving, you might encounter ropes or other lines. When you are lake diving with a friend (as you should ALWAYS have a diving buddy) can use the knife to knock on their air tank to get their attention.

For safety’s sake, always carry a knife in case you or your diving buddy gets caught in a fishing line or tangled rope or debris on a lake bottom.

Anything above 1,000 feet is considered altitude diving. It is just like mountain climbing; the higher you are up the mountain, the more extreme the effect on your body is. The same holds true for lake diving.

There is low-altitude diving at lakes like Summersville Lake in West Virginia or a dive at more than 7,500 feet in Yellowstone Park in Wyoming. Any dive made 1000 feet above sea level is considered an altitude dive.

An altitude dive will affect the decompression requirement for a dive. The stop depths and decompression times for diving in a freshwater lake will differ from those used for the same dive profile at sea level.

Make sure that you know the decompression requirements because Diving At Altitude can present some risk.

Freshwater lakes tend not to be as affected by tidal movements as saltwater locations are. As a result, sediment builds on the lake bottom that translates into the mud. When this mud is disturbed by the motion of your diving fins, it can significantly impact visibility.

As there are not the same currents present as in the ocean, there are also more static particles in freshwater lakes. Overall, visibility when freshwater lake scuba diving will not be as clear as in saltwater.

A diver is more buoyant in salt water than they are in freshwater. Because saltwater is denser than freshwater, it is more difficult for a diver to achieve neutral buoyancy. The number of diving weights needed in salt water will be determined by a diver’s mass and the type of tank they carry.

You should conduct a buoyancy test whenever you switch between saltwater and freshwater.

How To Conduct A Buoyancy Test:

Remember to keep your legs still and don’t kick. Any kicking motion will move you upward and negate the ability to determine the amount of weight required.

Freshwater lake scuba diving calls for many of the same rules that apply when saltwater diving. The rule of thirds applies to both water conditions.

This rule means that you should use no more than one-third of your total air supply during the descent and outward journey. The second third or your air supply should be used for your return journey and ascending back to the surface.

The remaining third is a safety reserve. While this rule is especially helpful for cave and wreck dives, until you are familiar and comfortable with diving in freshwater lakes, it is a good rule to follow.

If you decide to try freshwater lake scuba diving, you will have no shortage of lakes. There are estimated to be 117 Million Lakes Found in the Latest World Count – National Geographic Society.

If you decide to stick to just the United States, many US Lakes have their own unique qualities and attributes. Lake Michigan, one of the Great Lakes that border the state of Michigan, is one of the best freshwater wreck diving locations in the country, with over 400 wrecks to explore.

Some divers make it a habit to go looking for lost items on lake bottoms. This particular diver seems happy with his treasures: Finding LOST VALUABLES Every Time we Scuba Dive in Lake!

The Professional Association of Diving Instructors (PADI) lists a few top locations worldwide to go for freshwater diving on their website. What do people eat at Sun Moon Lake? Taiwanese Dish Ideas for your Lake Vacation Learn How to Tie A Hammock: Lake Camping 101